Capturing the heart of a nation: How an UP42 partner imaged an entire country on a monthly basis

The democratization of satellite data through initiatives like the EU’s Copernicus Program supports innovation and powers use cases across industries that improve people’s lives and drive environmental sustainability. And indeed, it is often governments and national or transnational space organizations that fund and facilitate such large-scale projects.

This involvement of the public sector helps mature the industry with demands for higher resolution imagery, broader coverage, and an expanded catalog of use cases. That is why it is so exciting to see projects, such as the one outlined in this post from HEAD Aerospace and the Netherlands Space Office (NSO).

The Limitations of Open Data Sets

The Copernicus Program, while hugely valuable, has significant limitations mainly when it comes to spatial resolution, with Sentinel-2's visible and near-infrared bands maxing out at 10m resolution and other bands ranging from 20m to 60m.

Clearly, for use cases that demand a higher level of detail, such as urban planning or precision agriculture, a higher resolution is required. And indeed, even in the commercial sector, high-resolution satellites can lack the revisit rate or swath that enables frequent capture of vast areas, such as entire cities or countries.

As a result, the NSO put out an international tender, won by HEAD Aerospace. Could HEAD Aerospace deliver very high-resolution imagery of the entire area of the Netherlands every month during crop season?

HEAD Aerospace was tasked with delivering a national data portal containing very high-resolution imagery on a monthly basis for five months during crop season and once during the winter. That means capturing approximately 40,000km2 of imagery six times a year for the duration of the four-year contract running from 2019 to and including 2022.

The data portal, which has amassed 1500 users and growing within the Netherlands, was created to fulfill the needs of four vertical markets - Agriculture, Urban Planning, and Water Management.

Agriculture has long been a staple use case for remote sensing. Vegetation indices applied to low-to-medium resolution imagery provide fairly reliable insights on crop health and even yield prediction estimations. However, rarely, if ever, has high-resolution imagery been used on such a vast scale to produce precise information for smart-farming. 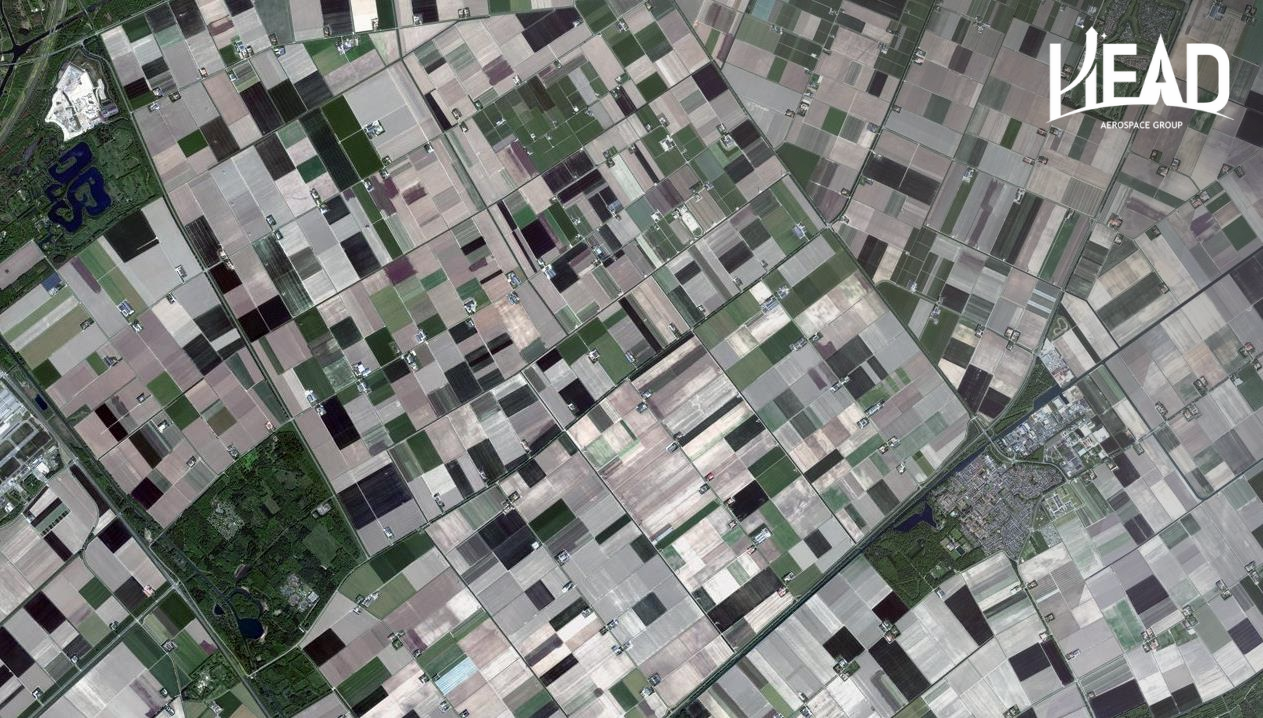 The Netherlands is one of the largest global exporters of tulip flowers. Below you can see the tulip flower farmland before, during, and after the crop season with SuperView imagery from the Netherlands National Country Coverage Portal. Imagery of this type was used to monitor crop health, leverage a range of vegetation indices, and identify the distribution of agriculture diseases on a local and regional scale. Additionally, insights were used to efficiently distribute both irrigation and fertilization based on crop health and terrain.

On a country-wide scale, the portal was also used to monitor the geographical and temporal distribution of crops. These insights combined to forecast yield biomass and even predict market prices of key Dutch crops.

The Lorentz Locks, or Lorentzsluizen in Dutch, is a lock complex in the Afsluitdijk, Netherlands, that helps regulate the water levels in the IJsselmeer lake and control shipping to and from the Wadden Sea. The NSO leveraged high-resolution SuperView imagery of the Lorent Locks to monitor the locks at different operational moments. 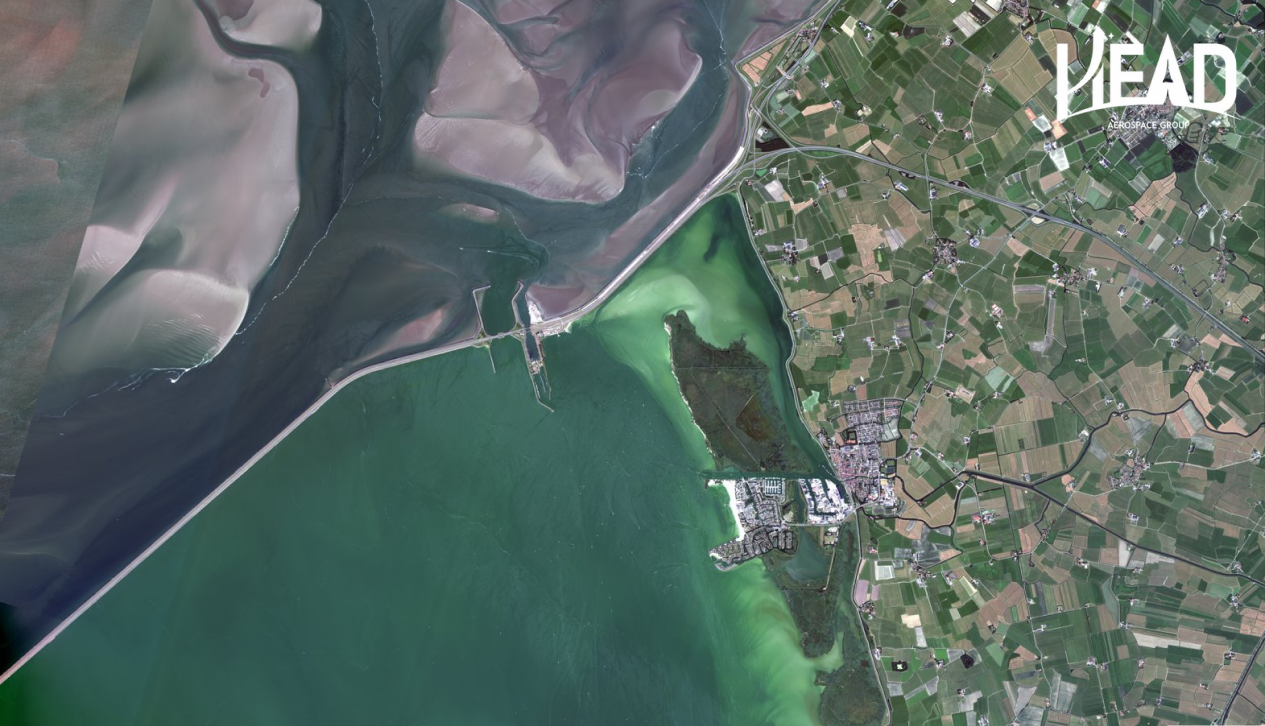 From the imagery, HEAD Aerospace identified when the locks were open or closed and monitored the water discharge and sandbanks on both sides of the dam. Part of the aim of the project was to monitor the effects of siltation, a type of water pollution caused by particulate terrestrial clastic material, which can, itself, cause dam deformation, stability problems, channel silting. Furthermore, siltation can affect the operation of the locks or make navigation impossible. The imagery from HEAD Aerospace monitored the movement of the sandbanks to provide information about dredging - the removal of water particulates from the water, in this case, to reduce siltation - volume in the entrance area.

End-users of the water management section of the national portal, such as the Netherlands Water Board, used the information for dredging maintenance, preventing siltation of the entrance channel, and thus ensuring smooth movement of ships and operation of the locks.

Finally, on top of the SuperView imagery, Rijkswaterstaat, the Dutch Ministry of Infrastructure, trained and deployed a change detection algorithm for the Dutch Ministry of Infrastructure & Water Management. The change detection algorithm aimed to automatically detect changes in the road network, specifically the addition of new roundabouts.

The output of the roundabout detection algorithm was used to update the Nationaal Wegenbestand (NWB), the openly available single source of truth for Dutch road maps.

On a technical level, the Rijkswaterstaat used image recognition methods (ImageNet pre-trained convolutional neural networks) and relearned additional layers using 1400 manually classified images of roundabouts. The algorithm identified 63 roundabouts not included in the NWB in South Holland, with an accuracy of ~96%.

As we can see, projects leveraging machine learning and satellite imagery can drastically improve open data on road networks without the legacy need for significant manual intervention.

This project was fulfilled by the SuperView constellation from HEAD Aerospace. However, since the project began, HEAD Aerospace has launched EarthScanner-1 and, very recently, EarthScanner-2. These satellites boast an incredible 136km and 150km swath, respectively, and can consistently capture imagery of extensive areas.

Labeled “The World’s Largest Swath Satellite at Submeter Resolution”, EarthScanner-2 captures imagery at 50cm resolution with the capacity to capture up to 1.2M km2 on a daily basis. The unprecedented technology onboard the satellites enables areas of up to 40,000km2 to be captured in a single pass, fulfilling the needs of projects of a similar size and scope of HEAD Aerospace’s project with the NSO.

With these new constellations, HEAD Aerospace can capture a full country or region with just one satellite pass. In the video below, EarthScanner-1 captured just one image of two countries - Qatar and Bahrain - on April 20, 2021 in a single pass. This results in a far more consistent image, delivered much faster than satellite constellations that require repeat visits.

Imagery of Qatar and Bahrain shared through HEAD Aerospace's LinkedIn

As HEAD Aerospace continues to expand its offering in number and even more advanced constellations, so does its capacity to fulfill ambitious large regional, national, and international projects. Projects that, as mentioned, further mature an industry that is already delivering immense value.

The Democratization of Satellite Data

As this project demonstrates, national governments and space agencies have the power to unblock many of the limitations that prevent the democratization of very high-resolution satellite imagery. In doing so, they unlock use cases that provide economic benefits that go above and beyond the costs of such a project.

However, the benefits extend way beyond the economic good. Improved crop monitoring, for example, drives efficiency in food production and can help nations achieve increased self-sufficiency and food security. Indeed, the Netherlands is a leader in efficient and sustainable agriculture; and the second-largest exporter of agricultural products globally.

By making this data freely available to private companies and a range of government authorities, these projects can create a snowball effect of geospatial and technological innovation that begins with awareness and the adoption of satellite imagery. This innovation drives digitization which improves their citizens’ lives, economy and drives long-term societal good.

A version of this post was originally published by Geoawesomeness on 13 June, 2020. From keeping an…