Forest Fires from Space: Looking at Lockdown in India

A version of this post was originally published by Geospatial World on 18 August, 2020.

In India, around 95% of forest fires are human-caused. In recent years, they have posed an increasing threat to humans and nature. Can satellite imagery analysis reveal changes in the number of forest fires ignited in India during lockdown?

Every year, Earth Day is celebrated on 22 April in appreciation of our planet, its inhabitants and the environment we increasingly need to protect. The theme of this year is climate action. Which is why we launched a four-part series that takes a closer look at areas of Earth that are experiencing environmental change.

Each piece will ask and answer a question every time—using geospatial data and analytics to extract insight and raise awareness of our changing world. We’re spotlighting each of the Earth elements: Earth, Water, Air, and Fire.

Q: Have forest fires in India reduced since lockdown began?

Many parts of the world during these troubled times are experiencing cleaner air, water, and a return to nature. However, early on during the pandemic, fires still blazed through countries such as Poland, Thailand, and the Netherlands.

Tools like Global Forest Watch help us to keep an eye on the fires erupting across the globe. Especially during the COVID-19 pandemic, it is increasingly difficult to prepare, fight, and assess forest fire damage.

For months now, India has been put under what is known to be the single largest lockdown in the world amidst the COVID19 emergency. On 24 March, a nationwide lockdown limited the movement of the 1.3 billion population of India.

Like everywhere else, COVID has put extreme limitations on human mobility in India. This is primarily how early on, India has managed to keep infection numbers under control despite the extremely high population density.

As with many others, forest fires in India are one of the most menacing disasters of all time.

Most of India’s forest fires are triggered by human activity, directly or indirectly. In India, people living in the vicinity of forests often intentionally ignite fires.

Most of the fires are started for clearing farmlands in preparation for the next round of cultivation. This often helps to remove pests, diseased wood and invasive weeds. Forest fires are also used to collect products such as Mahua flowers.

Increasing temperatures also means little or no moisture. This leaves dry leaves, weeds, and bushes—acting as fuel in the dry summer season—further increasing the chances of forest fires breaking out. Small triggers such as fires ignited by farmers as an annual clearing process or bonfires, are a few of the many sparks that can create an inferno-like situation in just mere seconds—often becoming uncontrollable.

According to the National Forest Inventory, 9.89% of forest areas in India are heavily affected by forest fires and 54.40% are mildly affected. This means that a total of two thirds of Indian forest areas are vulnerable to forest fires.

With the increasing occurrence of forest fires in India, has lockdown had an effect on the number of fires that have happened this year?

Logic would dictate that more movement restrictions would mean fewer people stepping outside? Which would, in turn, mean fewer fire incidents occur in India during the lockdown.

If this hypothesis holds true, it would empirically prove that most of the fires that occur in India are human triggered.

To find out, we’ll be using satellite data as well as statistical data in order to better understand this year’s fire season—from January to May.

How can satellites help?

While the impact of fires is far and wide and is not limited to small geographical areas, there are multiple satellite-based Earth observation missions focused on sensing temperature spikes, mapping burnt areas, and estimating gaseous emissions.

With the Short Wave Infra-Red (SWIR) band in the Copernicus Sentinel 2 mission, it is very easy to look beyond the layer of smoke and at actively burning and burnt areas—helping to further analyze and understand ecological and anthropological details.

At Vasundharaa Geo Technologies, we have been working with UP42 and creating solutions that can be hosted online. These solutions are typically tailored towards use cases such as forest fires that are specifically designed for non-Earth Observation experts. Why? To create processing blocks that take care of complex image processing.

This way, outputs are delivered in an analytics-ready condition for the subject matter expert to further analyze, correlate, and study. Bringing satellite data together with processing in this way helps us to find answers quicker and understand areas of the world sooner.

The Burnt Area Extraction tool helps to analyze recent and historical satellite imagery to find out how much land has burnt, and whether that is widely different to previous years. Further analysis using tools such as Normalized Difference Vegetation Index (NDVI) can then give us a better idea of vegetation and crop loss, as well as carbon and nitrogen emissions due to fires.

In a previous blog post, we have detailed the process of using a Burnt Area Extraction processing block to study the California fires in November 2019. Today, we’ll be running through how to do the same kind of analysis with Indian fires—specifically to investigate if there is an observable change since the country went into COVID-19 lockdown.

We’ll also be using statistics from the Forest Survey of India (FSI) to supplement our satellite data analysis—bringing in multiple data sources is a great way to understand an area of the world from multiple perspectives and at greater depth.

How to detect fires in India

Pune is currently one of the hotspots for COVID infections and is surrounded by the western and southern areas with substantial forest, which are subject to burning every year. 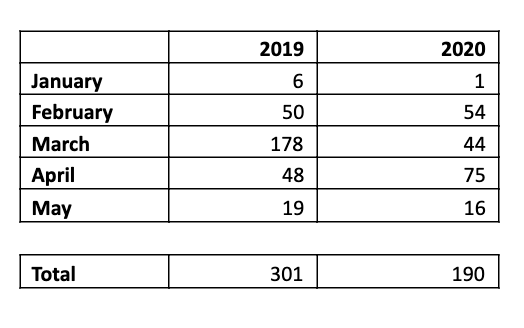 Looking at the comparisons, it is clear that early in the year the number of fire triggers in 2020 are close to what was observed in 2019.

With the onset of March and increased movement restrictions show a drastic drop in fire events. However, an interesting twist comes in when movement is opened up and April 2020 sees more fire events than April 2019.

By May 2020, there is substantial rainfall in Pune which affects fire events to a great extent—ending the fire season of 2020.

The map above represents fire events within the boundary of the Pune urban area. Taluka, the area mentioned, is a unit of political area distribution. The urban area of Pune falls under the Haveli Taluka.

Let’s combine Sentinel 2 imagery of the surrounding area of Pune, with the Burnt Area Extraction algorithm to extract the burnt areas for 2019 and 2020. This algorithm is ideal for fire impact monitoring since it can detect burnt areas of vegetation.

The results of March in both 2019 and 2020 are shown below. The size of the area selected is a 100 sq km AOI, within the above-shown region of Taluka.

For a more detailed run-through of this process, take a look at our blog post on the California fires.

The first thing to highlight is that a reduction in fires is drastically observed closer to the city limits where the lockdown is very strict and restrictions are very high. Secondly, all fire locations that vary from last year are all on hill slopes.

This proves that hill slope fire incidents are predominantly human-caused. This calls for a deeper anthropological study to understand the motivation behind this activity being quite annual—even during the lockdown.

We carried out the same analysis on a much larger area around the same AOI, and it was clear that India’s COVID lockdown had drastically influenced fire incidents this year.

That is close to 52% less than the previous year, a dramatic reduction having significant effects overall.

So, can we answer the question: Have forest fires in India reduced since lockdown began?

The simple answer is yes. Lockdown drastically reduced the number of fire instances.

As mentioned, most of India’s forest fires are triggered by human activity, directly or indirectly.

Being so heavily dependent on human interaction, we have now proven to show that the severe lockdown due to the COVID pandemic led to lower fire instances.

By using VIIRS and SNPP data for the months of February, March and April, we observed a much clearer trend—which showed a clear drastic change in fire instances.

Intuitively it can be very clearly inferred that fire instances that were completely dependent on human activity, did not ignite and at least a couple of months went by without scarring the planet.

We looked at the Pune urban area and the surrounding rural region—it is clear that at least in this part of India— lockdown has significantly reduced the extent of fire damage typical for this time of the year.

Having said that, with the increase of fire events now back to normal levels, this is a further indication that fires in western Indian regions are largely human-caused.

It is our observation that publishing data, derived from open source imagery on a regular basis creates deterrence against further events—while giving stakeholders handy insights to plan mitigation activities. Such transparency will hopefully create positive change.

We wouldn’t be UP42 without our partner community. Thanks to our partners, we have a growing…