While the global mean sea level rose by 1.7 mm/year in the  20th century, satellite records show that there was a marked acceleration from 1993, with the sea level rising at 3 mm/year.

The graph below shows the rising trend in global mean sea levels and projections for the future. 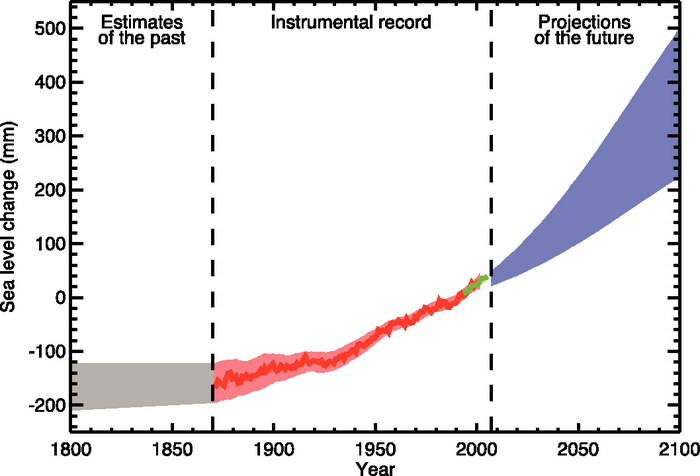 Time series of global mean sea-level in the past and future. Source: Intergovernmental Panel on Climate Change (IPCC)

So, why is sea-level rise a problem?

For low-lying coastal zones and small islands, sea-level rise (SLR) could cause frequent flooding, permanent submergence, salt-water intrusion and increased subsidence. SLR also increases the impact of extreme weather events like storm surges, which will push further inland than they did before.

A 2021 study estimates that permanent flooding could lead to a 0.19% drop in real GDP (assuming a 4.5 Representative Concentration Pathway (RCP)) by the year 2200.
Given that SLR is not uniform but varies regionally and locally, adaptation measures take different forms depending on the circumstance, as illustrated in the image below.

Types of responses to SLR (Source)

Choosing how to respond, therefore, starts with using decision support systems to assess future exposure and vulnerability to SLR.

Why are DSMs and DTMs important and how are they used to assess SLR risks for critical infrastructure? Let's find out.

What Are DSMs and DTMs (And Why Are They Important)?

A Digital Surface Model (DSM) captures the elevation of natural and artificial features on the Earth's surface. It is used for the detection of buildings, trees, telecommunication towers, highways, and other ground features. DSMs allow the extraction of 3D data on critical infrastructure. 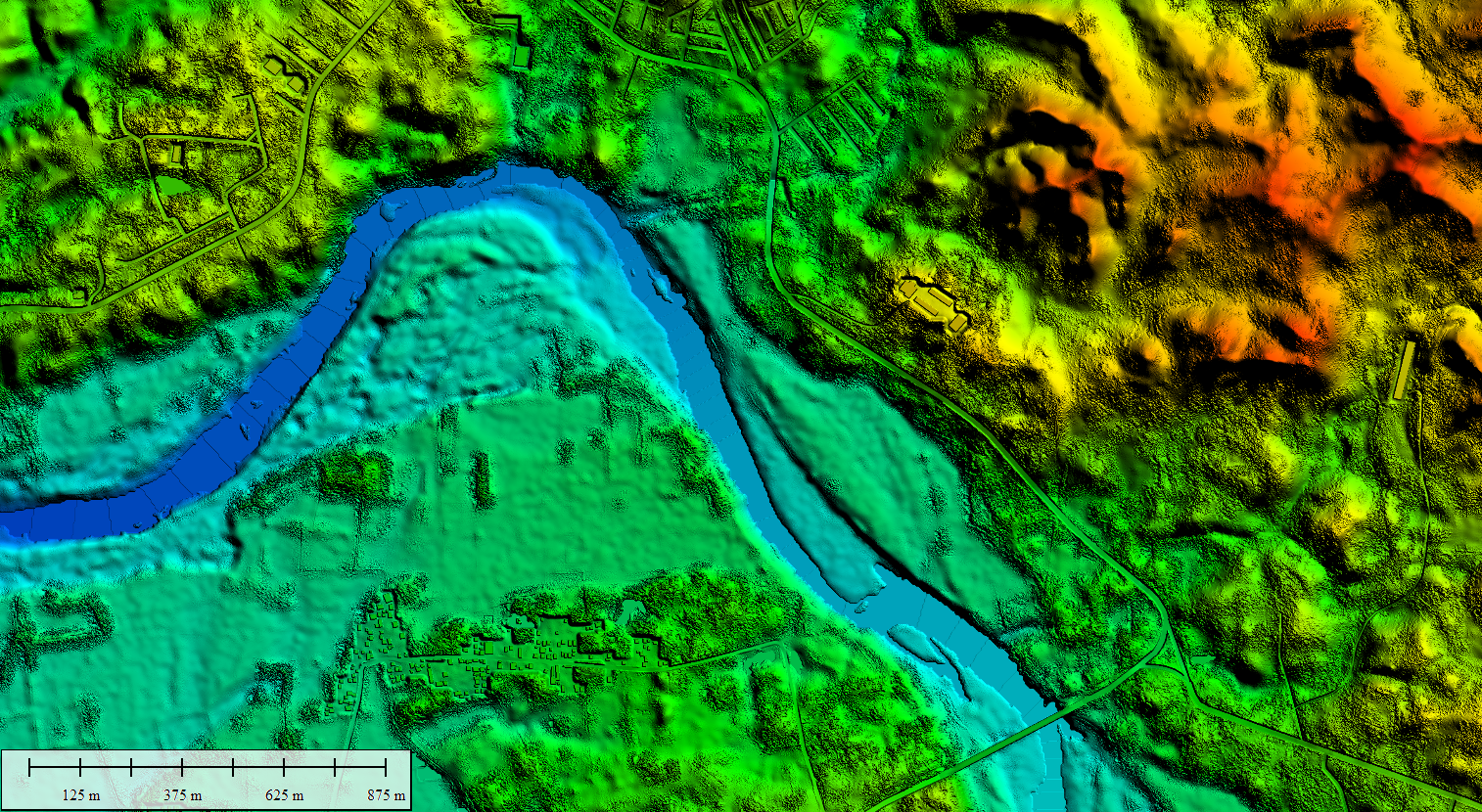 NEXTMap One DSM at 1-meter spatial resolution showing the elevation of natural features, vegetation and the built environment (Source: UP42)

A Digital Terrain Model (DTM) represents elevations of the bare earth—free from natural and artificial features such as vegetation and buildings. DTMs are crucial for SLR modelling because the shape of the Earth’s surface affects how water flows over it. 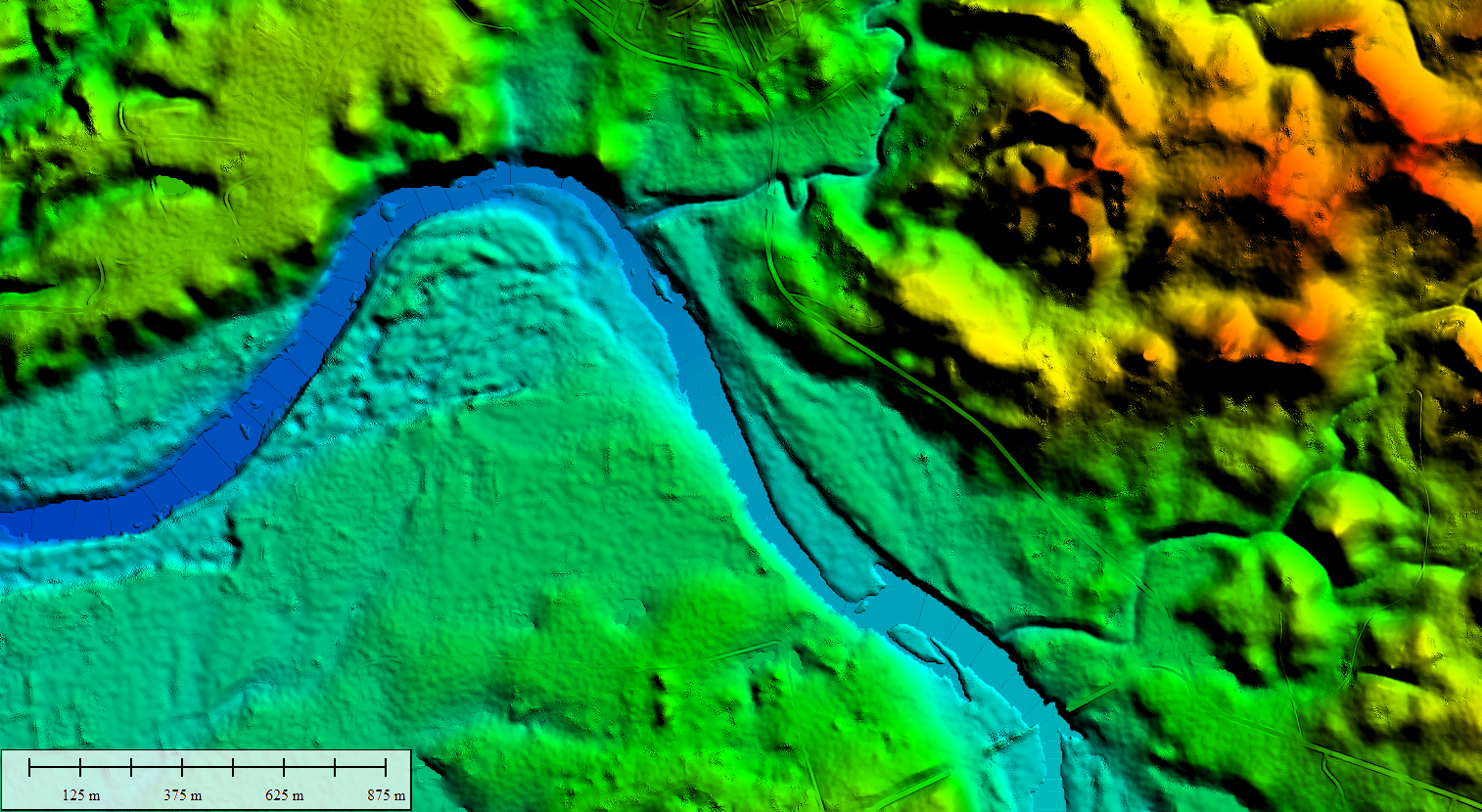 NEXTMap One DTM at 1-meter spatial resolution bare earth surface where features such as buildings, vegetation and other infrastructure have been removed (Source: UP42)

Normalised DSM (nDSM) is a derivative product of DSM and DTM. It is obtained by subtracting the DTM from the DSM. Note that the DTM and DSM used should have a common horizontal and vertical datum.

The nDSM is important because it allows direct measurement of heights.

Find out everything you need to know about elevation models here.

Here are 4 broad steps highlighting how DSMs and DTMs are used to assess SLR risks.

The sea level varies geographically, i.e., depending on where you are, the sea level is different.

Note: Because of the regional/ local factors highlighted above, some areas may experience a higher SLR rate than that observed globally---hence regional relative SLR rates.

According to the 2019 IPCC Special Report on the Ocean, regional SLR differs by about 30% from the global average. 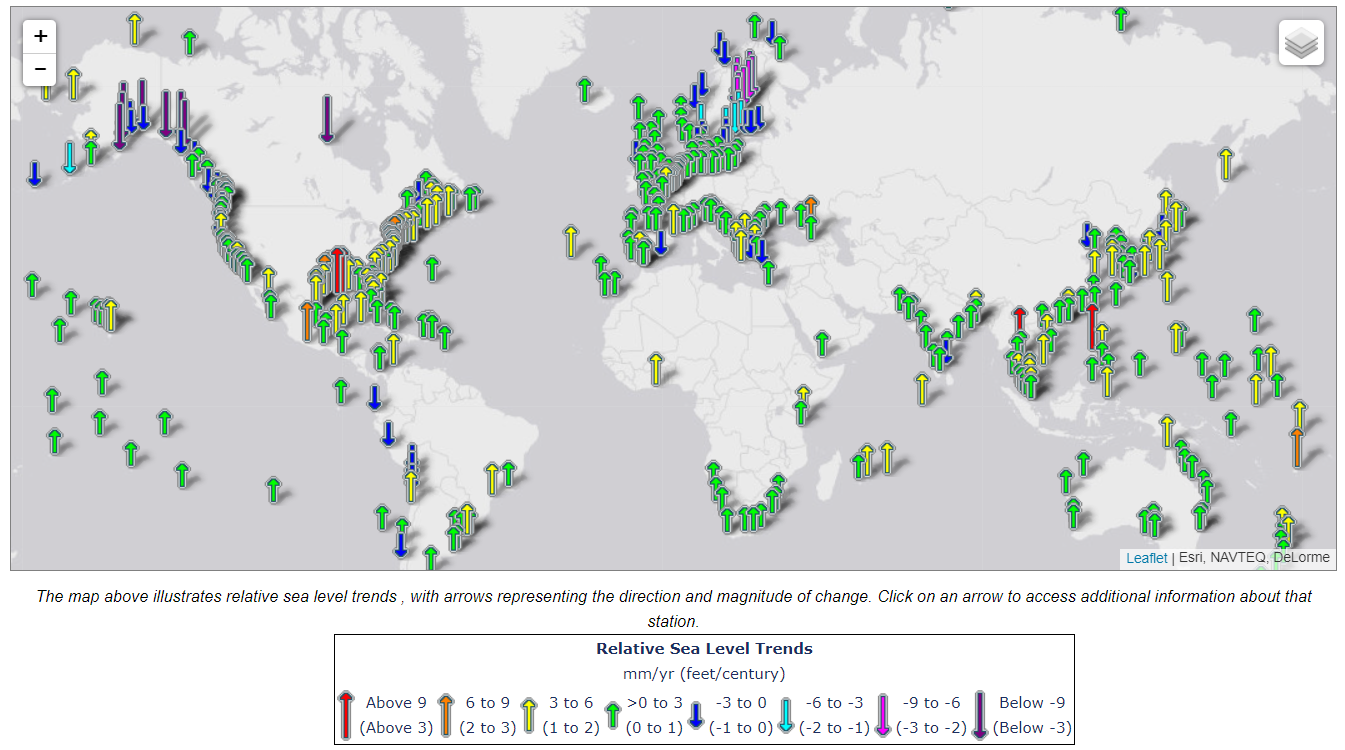 Since areas below high tide lines already experience submergence during high tides, the high water tide mark is often used as the reference water level. This ensures that SLR impacts are only mapped for areas where flooding is the exception rather than the norm.

Step 2: Selection of a Reference Datum

Water surface elevations are usually based on tidal datums, e.g. mean high water. As such, they must be converted to the vertical datum used by the DTM and DSM, e.g., ellipsoidal heights.

For the U.S., VDatum is a tool that can convert between tidal datums, orthometric heights and ellipsoidal heights.

SLR risks can be modelled for a range of SLR values to evaluate "what if" scenarios. These may be based on future SLR projections at a specific time.

For example, if the future SLR projection is 1.5mm/year, you may choose to evaluate SLR risks yearly over 10 years, where:

For the reliability of the resulting flood model, the SLR value used must be more than the vertical error of the DTM. According to the National Oceanic and Atmospheric Administration (NOAA), the general guideline is that the modelled SLR value should be at least twice the vertical accuracy of the elevation data.

This is to say that to model SLR risks over shorter periods, you need an accurate DEM. Sources include:

Subtracting the DTM from the Future Sea Water Level (obtained in step 3 above) results in a map showing:

Note: For a more accurate risk assessment, it is important to ensure that the water flows across the surface of the DTM as it would in the real world. This is known as hydrologic connectivity. Hydrologic connectivity ensures that low-lying areas behind an obstacle are flooded if there is a channel connecting them to the ocean. Some examples of means to improve hydrologic connectivity include cutting road fills at drainage structures or stream burning on the DTM.

Find out how you can use OpenStreetMap data and UP42 to map the impact of flooding.

For coastal areas---which are generally flat---the accuracy of the DTM used is crucial because small sea-level changes can have a huge impact on the extent of critical infrastructures affected.

The quality of input elevation data determines the minimum increments in SLR and minimum projected timelines. For example, while several elevation models exist for large-area assessment of SLR risks, a 2018 study showed that the existing global DEMS are inadequate for mapping fine SLR increments of less than 1 meter or future forecasting of fewer than 100 years.

The image below ranks the suitability of global elevation datasets for SLR modelling.

The table below highlights some sources of global elevation data and their characteristics.

Sea Level Rise (SLR) is not uniform globally but varies by region.

One reason for this is vertical land movements along coastal areas occasioned by:

For this reason, it is important to use an up to date DTM that captures changes in topography when assessing SLR risks. This is especially important for sinking coastal cities such as New Orleans, Bangkok, and Ho ChiMinh City.

Vertical errors found in global DEMs may lead to inaccurate SLR risk assessment, especially in densely vegetated and built-up areas. This is because global DEMs are DSMs that contain surface features like trees and buildings. Consequently, they tend to overestimate elevations i.e. positive vertical bias.

Some global DEMs may be more suited for modelling SLR risks in natural environments. And yet others may work better for urban areas. So, it is crucial to select a global DEM that best models SLR risks for the area of interest.

Various studies have assessed the suitability of different global DEMs for coastal flooding. We highlight a few of their findings below. 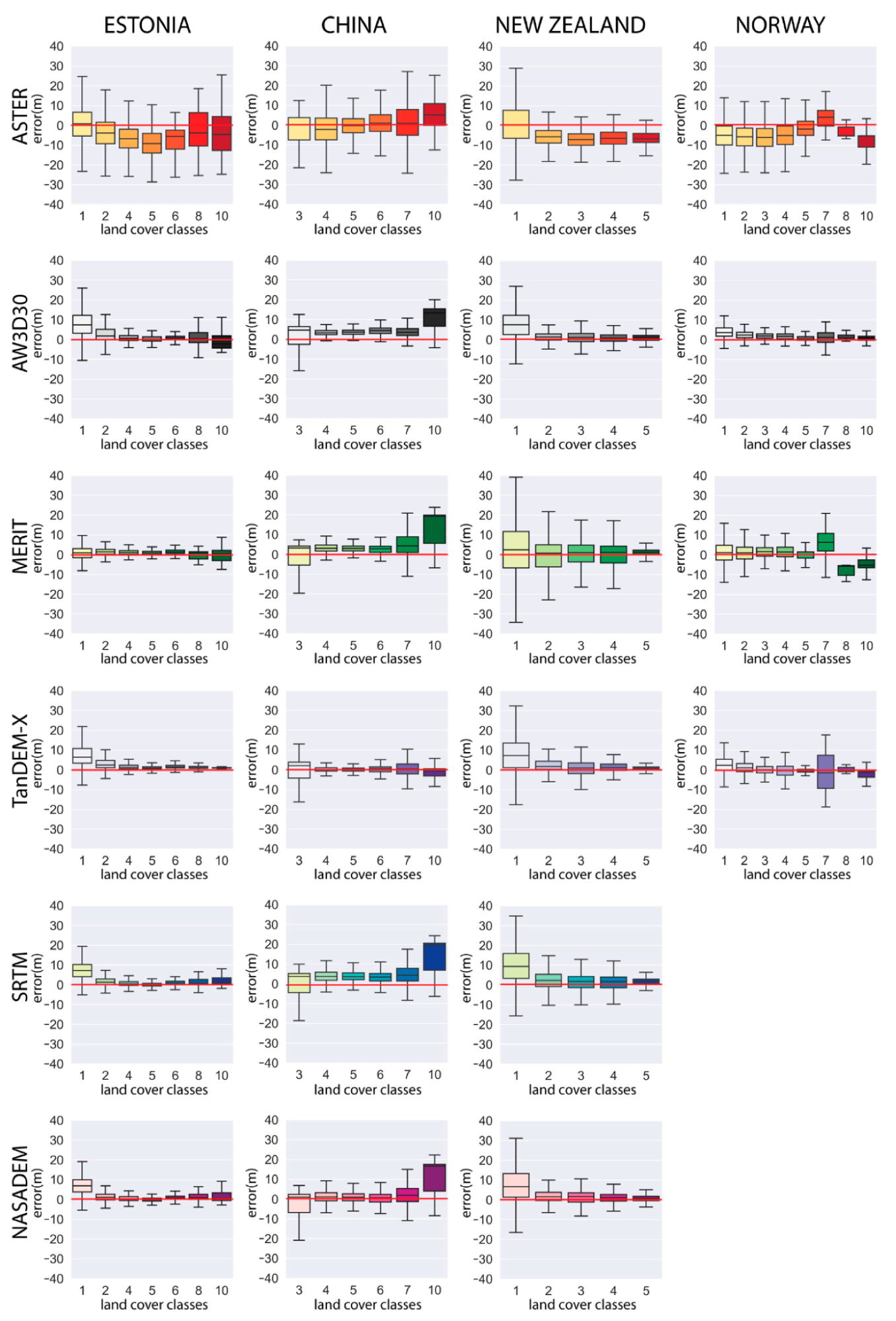 Responding to the Changing Climate

At the same time, investment in climate tech across various industries is growing with PwC reporting that climate tech now accounts for 14 cents of every venture capital dollar. At the centre of climate tech business models is the need for frequent, high-quality earth observation data and analysis capabilities.

With continued advances in machine learning and cloud computing capabilities, geospatial technologies enable the analysis of huge volumes of past, present, and future satellite data to deliver insights for climate change mitigation and adaptation.

On August 14, 2003, a few minutes after 4 pm Eastern Daylight Time, portions of the United States…