Despite the impressive capabilities of remote sensing satellites, one drawback is that they only capture high spatial resolution or high spectral resolution imagery.

The resulting images are either

In short, there is a trade-off between the spatial and spectral resolutions.

So, how do we take advantage of the complementary characteristics of panchromatic and multispectral images?

What is pansharpening? What role does it play in improving satellite imagery? And why is there a resolution trade-off? Let us find out.

Pansharpening (short for panchromatic sharpening) is an image fusion technique that combines a panchromatic image with a multispectral image to yield a high spatial, high spectral resolution image.

In other words, we use panchromatic image details to 'sharpen' the multispectral imagery while simultaneously preserving spectral information. 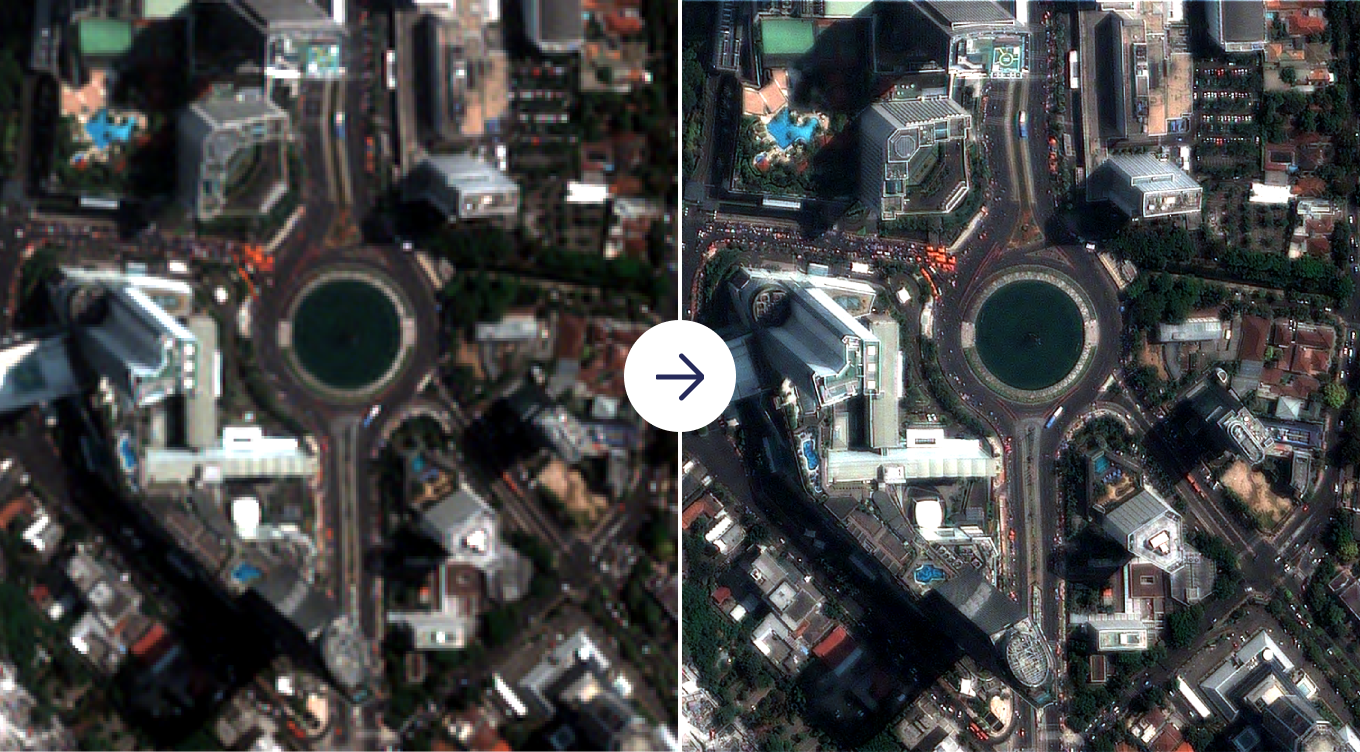 What is the difference between panchromatic and multispectral imagery?

Which prompts the question:

How do we pansharpen Sentinel-2 imagery since it lacks a panchromatic band?

Here, you can create a synthetic panchromatic band using different methods that take advantage of the 10m resolution bands. For example, the UP42 pansharpening processing block uses the average value of the red, green, blue, and near-infrared bands to obtain a panchromatic band.

What if the spatial resolution of the panchromatic band is below that needed for a specific application?

Alternatively, you can apply super-resolution deep learning techniques to increase the spatial resolution of multispectral bands beyond that of the available panchromatic band.

Why Not Collect Imagery At Both High Spatial And High Spectral Resolutions?

The design constraints include signal-to-noise ratio and data volume.

Optical satellite sensors are designed with a specific signal-to-noise ratio. And so the recorded signal should be higher than the noise to realize a useful image.

To increase the level of energy detected, the sensor can either collect data

This is where the spectral-spatial resolution trade-off comes in.

Panchromatic sensors collect the total amount of energy received over a wide spectrum. They, therefore, detect higher amounts of radiation over a smaller spatial extent than multispectral sensors.

Conversely, multispectral sensors divide the total amount of energy received into different spectral ranges. They thus need to sample a larger spatial area to detect the quantity of energy required to meet the signal-to-noise ratio.

Let us look at Pléiades Neo image bands as an example.

The purpose of pansharpening is to make satellite imagery sharper and thus easier to interpret.

Pansharpened satellite imagery is more suitable for human and machine perception or further image-processing tasks, such as segmentation, classification, and object detection. Let's see how.

A higher spatial resolution increases the ground details captured by the imagery, increasing the ability of the sensor to distinguish between closely spaced objects. This aids the identification of smaller objects like vehicles, narrow roads, or even individual trees. Additionally, fine details like shape, size, texture, pattern, etc. are detected, enabling interpretation.

By improving the spatial resolution of multispectral imagery, pansharpening leads to better visual interpretation for both humans and machines.

For example, roads and asphalt paved roofs may have identical spectral signatures but by considering the shape of the cluster of pixels (e.g., long and narrow vs. rectangular), these algorithms can distinguish them.

Pansharpening increases the spatial resolution of multispectral imagery and hence the ability of the object detection algorithm to distinguish between closely spaced features and identify the objects of interest. Application examples include ship, car, and building detection. 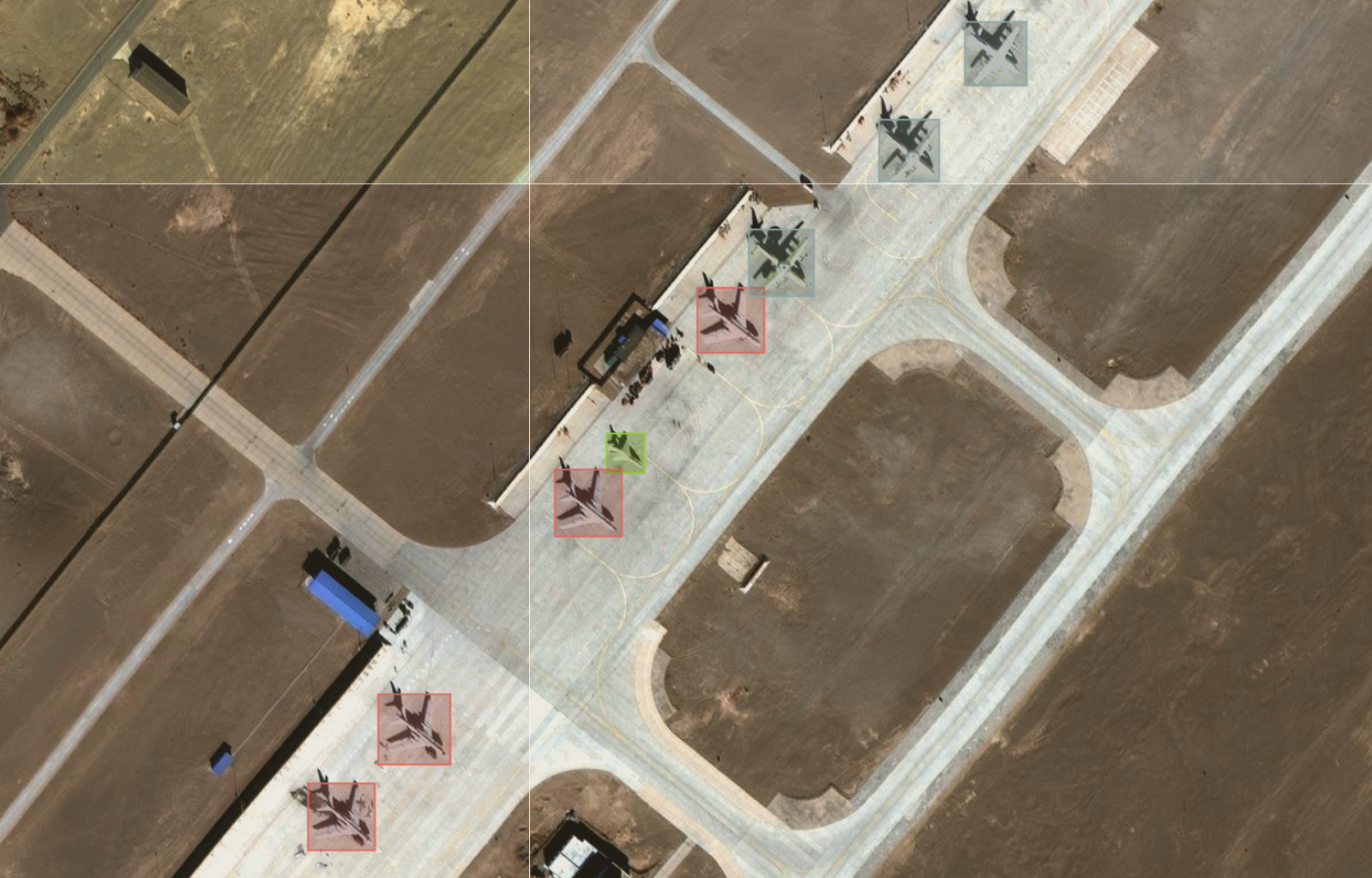 Multispectral imagery narrowly captures specific wavelengths of the electromagnetic spectrum that are sensitive to particular features on the ground or properties of the atmosphere.

Pansharpened imagery has a high spectral and spatial resolution, enabling the discrimination of land cover types and accurate delimitation of the area occupied by each land cover type, hence improved classification.

Satellites are a valuable tool for change detection. Their consistent revisit schedules facilitate the quantification of changes on a broad scale.

Change detection, however, depends on the satellite's temporal resolution. For instance, the approximate revisit time is 1 day for MODIS, 16 days for Landsat 8, and 5 days for the Sentinel 2 constellation. Shorter revisit times are needed to monitor rapid changes on the Earth's surface, such as deforestation, urbanization, or agricultural activities.

Pansharpening, therefore, has the potential to increase the availability of satellite imagery for more frequent, higher spatial resolution monitoring.

Get the Best of Both Worlds: Pansharpen Your Satellite Imagery

It can be challenging to access satellite imagery and the algorithms that go with analyzing it at scale. But that's changing. With a wide range of satellite data and processing algorithms, pansharpening is now easily accessible on the UP42 platform.

Ready to pansharpen your satellite data?

Check out the step by step guide on how to pansharpen.