How SAR Data is Complementary to Optical

These differences, however, do not mean that their use is isolated.

Here, we'll take a closer look at that interplay and see what drives it. Let us jump in.

SAR data is captured by a radar sensor mounted on a moving platform (satellite or aircraft). The sensor transmits microwaves to the Earth's surface and records the backscattered signals. The signal delay is used to determine the distance (range) between the sensor and the surface objects.

Why is it called "synthetic aperture"? 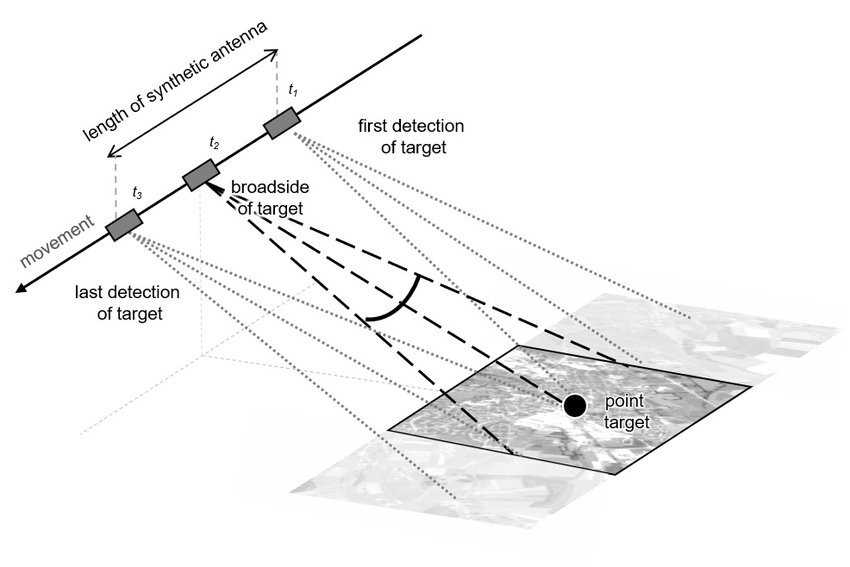 Why is it necessary to synthesize a virtual aperture?

To achieve a higher spatial resolution. The longer the SAR antenna length, the higher the spatial resolution, and vice versa---holding the radar wavelength constant. But, there is a limit to the physical length of an antenna that can be mounted on a platform.

Shortening the wavelength is not a viable option as it reduces the cloud penetration capabilities of the radar signal. Thus, it becomes necessary to synthesize a longer antenna using a synthetic aperture.

What information is recorded by SAR imagery?

SAR imagery captures the phase and amplitude (or intensity) of backscattered signals. These depend on:

Which are the commonly used SAR frequency bands?

The table below shows the frequently used radar frequency bands, the corresponding wavelengths, and examples of applications.

Discover the power of high-resolution radar for free.

What is Optical Remote Sensing Data?

Optical data is imagery collected by sensors which do not emit their own radiation but ‌measure solar radiation reflected ‌‌into the atmosphere by objects on the Earth's surface. Such sensors, which depend on an external source of energy to collect data, are called passive sensors.

What information is captured by optical imagery?

Optical imagery records radiance: the amount of radiation reflected by a surface. We also refer to this as reflectance or brightness. Reflectance varies by the characteristics of the imaged surface, recorded wavelengths, and atmospheric conditions.

Which are the commonly used optical remote sensing frequency bands?

Optical remote sensing systems measure light in the visible and infrared bands of the spectrum. The wavelengths range from ~400 nm (blue) to ~2500 nm (shortwave infrared).

Images collected in the visible part (red (R), green (G), and blue (B) bands) of the spectrum can be combined to ‌create RGB imagery which resembles how the human eye perceives the environment.

Infrared bands are not visible to the human eye but are important for revealing "unseen" properties like vegetation health, species characteristics, and surface composition.

Check out this post for a comprehensive rundown on satellite imagery, including factors to consider before purchase.

Find out how satellites, drones and helicopters complement each other in vegetation management.

What Does Optical Imagery Gain From SAR?

So what does optical geospatial imagery stand to gain from SAR? Well, a lot of it boils down to SAR being an active sensor. Geospatial optical imagery is limited at night when there is no light source, and by cloudy weather‌.

By emitting radiation, SAR sensors can collect data regardless of the weather ‌or time of day. Also, signal characteristics like wavelength, polarization, and incidence angle can be adjusted according to the use case.

According to a 2013 study, approximately 67% of the Earth's surface is covered by clouds. As a result, optical data is characterized by clouds, which may reduce image quality.

Microwaves have longer wavelengths and can see through clouds, haze, dust, and other atmospheric conditions. Pairing SAR and optical imagery is therefore vital in areas which experience persistent cloud cover. Further, being an active sensor, SAR can collect data both day and night.

In this way, data combination increases the reliability of earth observation data for time sensitive tasks like wildfire monitoring or disaster response during emergencies.

Note: Although SAR is deemed an all-weather remote sensing method, heavy rainfall containing large water droplets may scatter microwave signals, introducing noise in the resulting image. Hence, it is important to establish whether it was raining at the time of SAR data collection before use.

Microwaves are sensitive to the roughness and dielectric characteristics of the target object. SAR data thus enables the extraction of additional surface properties beyond those possible with optical data only.

Let us see how.

Surface roughness refers to small height variations whose size is comparable to the radar wavelength, i.e., centimeters. Roughness or texture influences the strength of the backscattered signal.

Smooth surfaces like water or roads reflect most of the incoming radiation away from the sensor, resulting in regions of little or no signals. Such areas appear black in SAR imagery. In contrast, rough surfaces reflect ‌most of the radiation to the sensor, resulting in bright image pixels. In this way, SAR enables the determination of surface roughness. 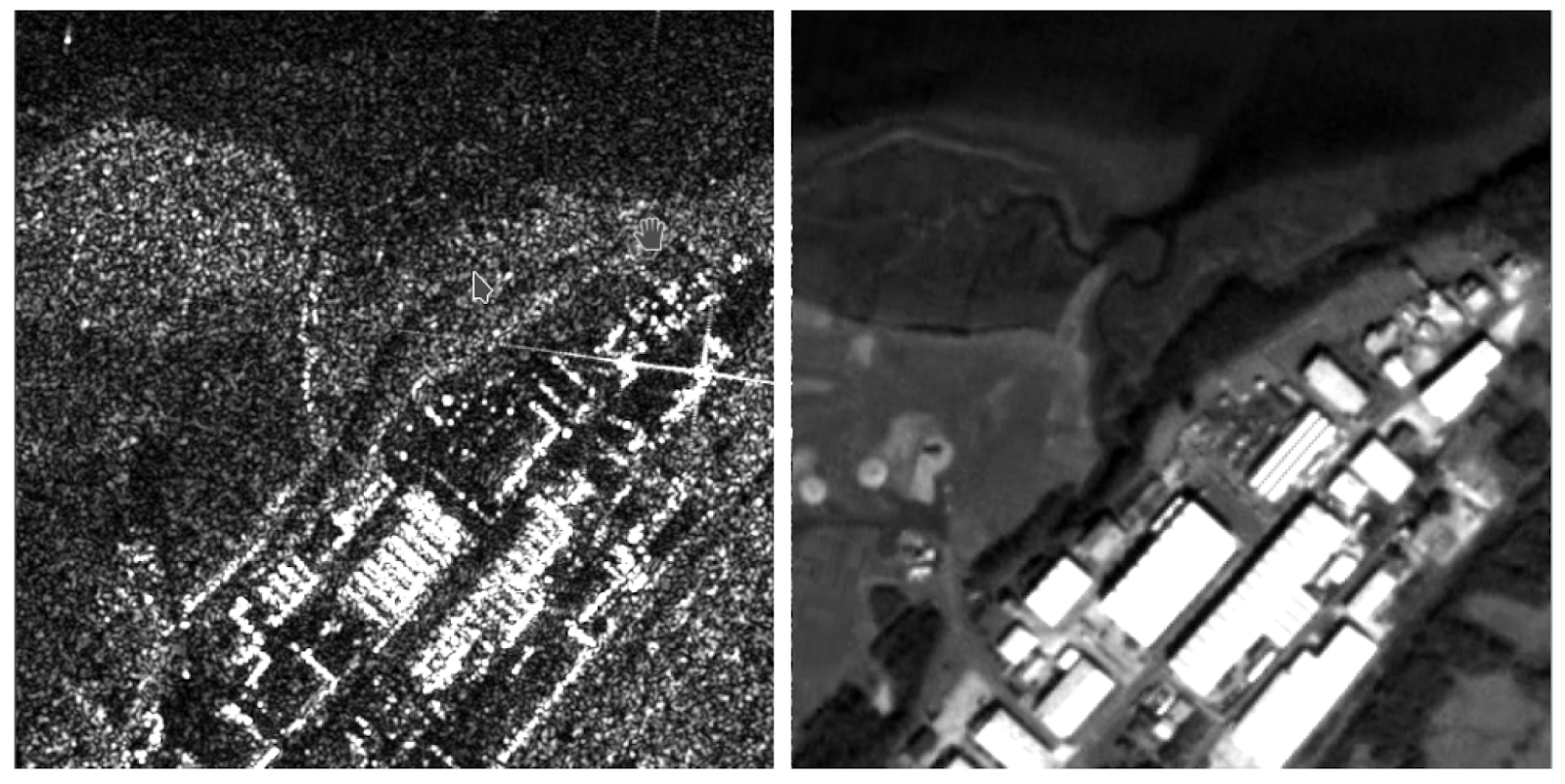 Microwaves are sensitive to moisture. Water increases the amount of energy stored in an object when it is subjected to an electric field. This ability to store energy is quantified using the dielectric constant, which ‌increases with increasing moisture content.

In a nutshell, pairing SAR images with optical data enables determination of the physical composition of the imaged surface. In addition, different SAR polarization combinations can reveal different object characteristics.

Note: Frozen soil has a very low dielectric constant, and may thus be interpreted as dry soil---which is not the case. SAR is therefore not an effective tool for soil moisture estimation in frozen areas.

Radar penetrates crop canopies and captures the variation in vegetation structure between different crop types or the same crops at various growth stages.

Vegetation penetration mostly depends on the radar signal wavelength. Longer wavelengths penetrate deeper than shorter ones. For instance, the L-band penetrates deeper into the canopy than the X-band, and may thus be useful in estimation of soil moisture below vegetation.

What Does SAR Gain From Optical?

SAR imagery lacks data on the visible and infrared ranges of the electromagnetic spectrum. Luckily, combining SAR with optical imagery fills this gap.

Optical sensors measure reflected solar radiation in specific intervals of the electromagnetic spectrum known as spectral bands. Materials on the Earth's surface respond differently in various spectral bands. For instance, vegetation strongly absorbs the red band and reflects near-infrared wavelengths, while water is sensitive to the short to mid-infrared bands. Spectral bands, therefore, can be chosen based on what you wish to examine.

In short, combining SAR and optical imagery facilitates identification and study of different materials found on the Earth's surface.

Optical images are simpler to interpret because they capture images in the same way we see them. Pairing optical imagery with SAR data, therefore, facilitates the visual interpretation of SAR images.

While it may look like SAR and optical data at opposing ends of the earth observation spectrum, they can undoubtedly work together to benefit your application.

SAR signals interact in different ways with objects, providing information that optical sensors may not detect. For example, material composition and texture characteristics of target materials. In addition, SAR is independent of weather and illumination source.

But SAR is prone to distortions caused by its side-looking geometry, making it harder to interpret.

Optical data presented as natural color images are easier to interpret. They also contain spectral information, which is useful for characterizing different objects. However, they are unusable in the presence of cloud cover or without an illumination source.

For these reasons, you can extract a lot of value from combining SAR and optical imagery. What we have discussed here barely scratches the surface of what is achievable. Explore our rich archive of SAR and optical geospatial imagery and pair the datasets in your own way. We can't wait to see what you discover.

If innovation without collaboration is just an idea that never materializes, it takes more than just…

As the year draws to a close, we’ve been working on releasing our final few product updates of 201…