Why satellite imagery is the key to ocean monitoring

Nearly half of the world's population lives within 80 kilometers of the ocean. And even if you live far from the coast, or in a land-locked country, ocean monitoring is incredibly important. A multitude of factors, from its temperature and levels to the life within it that serves as a source of food and oxygen, all influence life on the surface.

So the question is: how do we monitor over 360 million square kilometers of area, or 1.335 billion cubic kilometers of water? It's a daunting task. But luckily for us, we have remote sensing.

What is ocean monitoring through remote sensing?

Ocean monitoring through remote sensing simply means capturing and analyzing images of the ocean via satellites and aerial imagery. Governments and organizations use imagery to monitor the oceans for tons of different reasons; what all those reasons have in common is that it's easier and cheaper to use satellite imagery compared to other methods.

Think about it this way: even with today's technology, manually monitoring the oceans, which cover 70% of the planet's surface, would be an intimidating task. But with satellites, we can easily capture hundreds or even thousands of square kilometers for analysis. It's like how farmers monitor their crops with satellite imagery instead of manually checking on every plant, but on a far larger scale.

Of course, as with many fields of science, ocean monitoring via satellite imagery is fairly recent and follows a long history of human fascination with the deeps.

When did oceanography begin, and when did satellites come in?

Humans have been mapping the ocean in some form for thousands of years, but in terms of functionality, these maps were little different from land maps. While there's no doubt that sailors throughout history made use of ocean currents, the oldest surviving record was written by a fairly famous figure: Benjamin Franklin, one of the founding fathers of the United States.

In his role as Postmaster General (he was the first one of these, too), Franklin heard complaints that post ships traveling from London to Newport, Rhode Island often took weeks longer than merchant ships traveling from Cornwall to New York. This couldn't be explained by the relatively small difference in kilometers (or nautical miles, as they would have used) between the journeys. After some investigation, he found out that experienced merchants avoided a strong Eastbound current that would slow down their journey. He then worked with ship captains to map the current and named it the Gulf Stream, a name by which it's still known today. Franklin published his Gulf Stream chart in 1769. 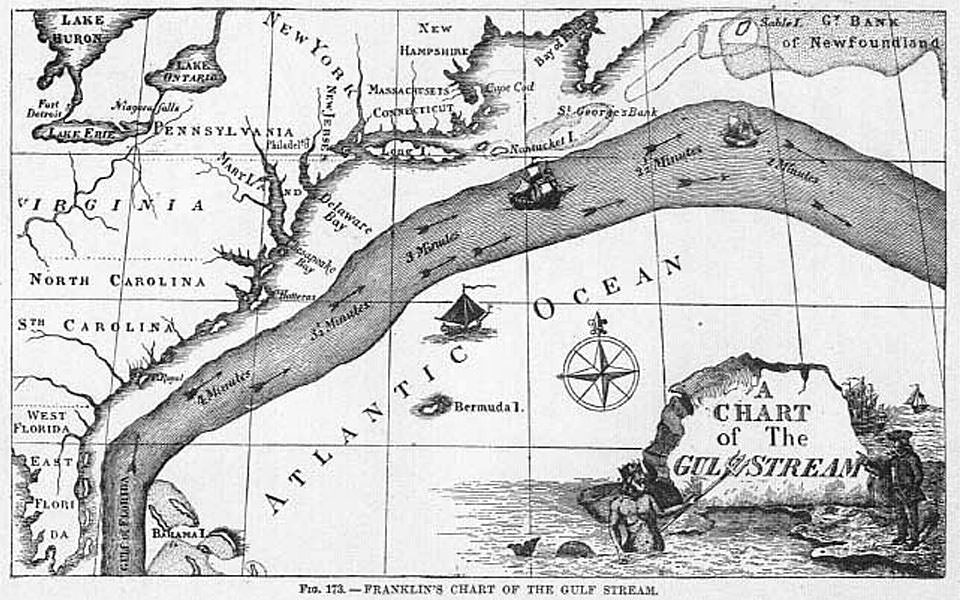 By the late 1800s, scientists were making a deeper study of currents, the ocean floor, and marine life. Advancements in sonar technology during World War II further boosted these studies, allowing for more detailed unmanned mapping. The next big development, in 1978, saw the launch of the aptly named Seasat, which was the first satellite designed for remote sensing of our oceans. Along with microwave, visible light, and infrared radiometers, Seasat also carried one of the first synthetic aperture radar (SAR) capabilities in space.

Unfortunately, Seasat only operated for about 5 months, until a massive short circuit ended its mission. But it showed scientists what was possible and paved the way for more ocean monitoring via satellite imagery. Today, the European Union's Copernicus program is a major source of information about our oceans via their fleet of SENTINEL satellites.

How can you use satellite imagery to monitor the ocean?

Satellites have made ocean monitoring easier than ever before–bathymetry (measuring the depth of water) is a good example. Way back when, bathymetry was performed through depth sounding, which meant lowering a heavy weight like an anchor attached to a rope into the ocean until it hit the bottom. Sonar system development during World War II, as mentioned above, allowed researchers to measure depth using sound from the undersides of boats. While sonar is still needed for deeper water, these days, satellites can reliably measure depth down to at least 45 meters.

The Pléiades Neo constellation in particular, with its new deep blue band, is ideally suited for ocean monitoring. The deep blue band offers better characterization of atmospheric conditions and shadows. It can penetrate deeper into bodies of water to offer more detail and accuracy for bathymetry and other hydrological use cases, from monitoring algae blooms to water quality.

Let's take a look at some other ocean monitoring examples.

Before satellite imagery: Ancient forecasting methods were based on either pseudoscience or learned patterns, but left much to be desired. The invention of the telegraph allowed ocean stations to communicate with each other and send warnings, and later on, radio transmissions allowed stations to warn ships in advance of dangerous weather. But these warnings often lacked precision.

With satellite imagery: Today, weather satellites work in conjunction with coastal stations to monitor ocean weather in real time, giving unprecedented insight into upcoming weather. For example, rain radars are a fact of life that wouldn't be possible without satellites. Historical data is used in conjunction with current and predicted weather to build accurate forecasts.

With current analytics abilities, you can even predict factors like wave height and peak wave periods. The UP42 marketplace offers different options for ocean weather analysis, which can be used to keep ships away from dangerous weather events and protect ocean and coastal infrastructure.

Before satellite imagery: Shipping ports throughout history have made use of harbormasters and harbor patrols to keep their crowded waters safe. Outside of harbors, radio technology allowed ships to remotely communicate with ports and with each other. But as you can imagine, collisions still occurred, and technical difficulties could result in ships going missing.

With satellite imagery: Modern ships unify marine radar, sonar systems, and satellite data to stay safe. An automatic identification system (AIS) is mandatory for larger ships on international voyages, broadcasting out their information every six minutes. AIS data is also heavily used by ports and maritime authorities to track ships and traffic levels in their waters. It's an extremely important tool for avoiding collisions. Another benefit is that it's virtually impossible for an AIS-equipped ship to go missing and not be found.

Even in case of missing AIS data, optical satellite data can be used to track ships on their journeys, and SAR data can find ships in any weather conditions. 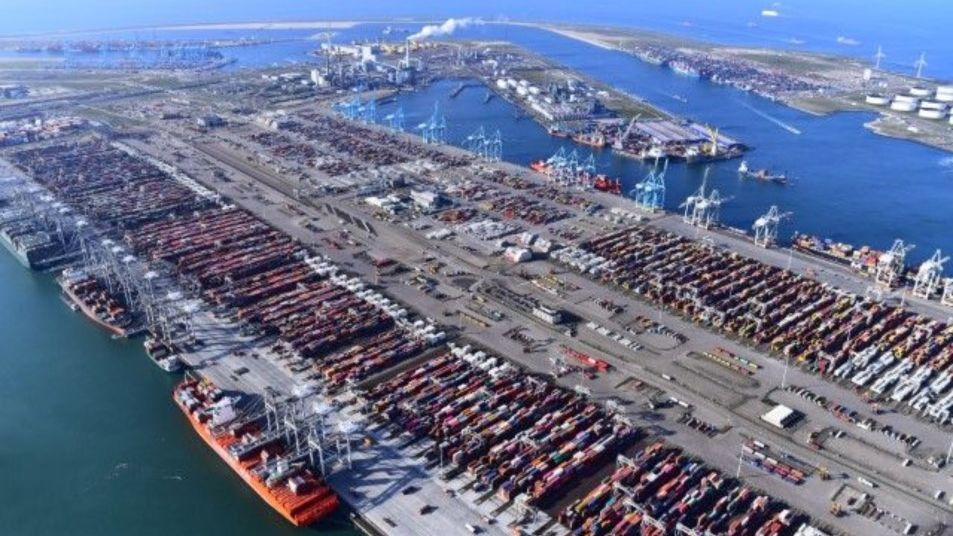 Before satellite imagery: the longest-running sea measurement program started in Amsterdam in 1675, using tidal gauges. But localized programs can only make relative measures, and as sea levels vary across the globe, a better method was needed.

With satellite imagery: By creating digital surface models through acquired satellite imagery, it's easier to get a clear understanding of sea level rise, as well as track melting glaciers that contribute to it. We can then predict future levels and make plans around it, i.e. by ensuring that infrastructure is in place to protect coastal towns and cities, and that future construction minimizes risk of damage.

To learn more about assessing risk from sea level rise, read our latest article on the topic.

Before satellite imagery: Disasters like oil spills have devastating effects on marine life. Prior to satellites, trained observers on planes or helicopters would identify and map oil spills from the air. But oil spills move fast and can cover hundreds or thousands of square kilometers, so this method wasn't the most efficient.

With satellite imagery: Remote sensing allows us to easily and quickly find oil slicks on the ocean's surface, monitor their shifting area, and identify which parts are the thickest to better prioritize cleanup efforts. This, combined with satellite data about ocean currents, also enables us to predict which way the spilled oil will move and try to mitigate its worst effects.

Similar to oil spill monitoring, satellites also allow us to detect bilge dumping, which is when ships dump bilge water–wastewater that can contain oil, waste, and other dangerous chemicals–directly into the ocean instead of disposing of it safely. Our friends over at Geoawesomeness have written an in-depth article on this topic, which you can read here.

Accelerate your ocean monitoring with UP42

These are just a few examples of ocean monitoring through satellites, but it's not a complete list. Humanity is dependent on the ocean for survival, so we need to monitor it in the most efficient way possible. And fortunately, remote sensing has made this job much easier. If you have questions about how we can help you with your use case, or you'd like to explore your options, please reach out to our sales team.